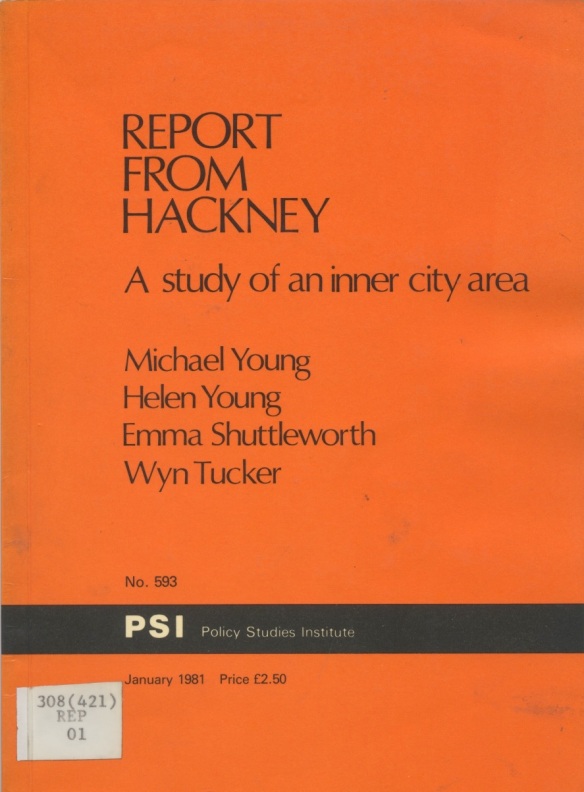 A survey of just under 1000 people in the Borough in 1979, focusing primarily on housing, (un)employment, crime, race/immigration etc.

The story is not one of unrelieved gloom. The people of Hackney are as energetic as they are friendly, as immensely varied in their origins as in their present way of life. Many of the buildings are dreary, never their inhabitants.

[…] almost every great act of intolerance in Europe, or elsewhere, has had its repercussions in Hackney, from the persecution of Huguenots in France, the suppression of the Basques in Spain, the pogroms against the Jews in Russia to the victimisation of the opponents of Idi Amin. The incomers have all contributed to the vitality of the borough. They have often arrived in the south of it and moved northwards, and sometimes right out of it, as their circumstances have improved. The three latest waves of migration have been of West Indians in the 1950s and 1960s, of the Asians from East Africa and the Indian sub-continent in the 1960s and 1970s and of Turkish and Greek Cypriots in the 1970s.

People have clearly gone on being attracted to Hackney as a place in which to live. More than three out of every four people in our sample – 77 per cent have moved into the borough since birth. Nearly one out of every two – 46 per cent – came in from other parts of London or Britain, some brought in by their parents but most as a matter of choice.

[…] In spite of the gulf the women felt between their way of life and some of their neighbours, neither of them supported the National Front.

Mary: ‘Someone near here has been vicitmised. He’s had NF painted on his door, he’s had paint and rubbish thrown.’

Janice: ‘He’s a nice man, he’s a doctor in fact. I don’t know why they pick on him. I mean, he heals their wounds, so why should they?’

Mary: ‘The Front are nut cases. Once they start on about the blacks, say the blacks all go, the Asians all go, right? Next thing you know it’s the Jews. Then it’ll be the Irish, then the Catholics. As far as I know, unless you’re white, English and Protestant, you’re out. That the way they see it.’

One quarter of those in our sample who had arrived in the last five years were in the professional managerial class […] Another young single woman lived with four others like her, all members of the women’s movement and consumers of health foods […] the areas where professional people are most in evidence are De Beauvoir Town, Victoria Park and parts of Stoke Newington.

Fewer of the people in the professional and managerial class wanted to leave Hackney than in any other occupational class […] The reasons they had moved into Hackney are obvious enough: cheaper houses near to the centre than in many parts of London. Several of them also appreciated the combination of an old house to live in and the presence nearby of working-class people. Insofar as they were politically minded they tended to be of the left.

[…] Their arrival has, of course, not been welcome to everybody. They have taken over some of the most desirable housing in the borough, and pushed up houses prices beyond the reach of some local people who might otherwise have been able to buy. […]

There has been, and is, much poverty in Hackney. An enquiry in 1971 showed that the average household income was lower than in any other London borough.

People had many different grievances on this score and we cannot do more than give an impression of them, partly because they varied so much. In a furnished flat or room the complaint was often enough about the rent. In an unfurnished flat it could be about the lack of a bathroom (There are still some 14,000 households in Hackney which do not have exclusive use of bath, hot water and an inside W.C.). In Council flats, where most of the people lived, it all depended on the flat.

A nation grievously divided between poverty and affluence will never survive. If Mr Heseltine thinks that areas like Hackney do not need special help he should first come to Hackney to spend a night on one of its housing estates.