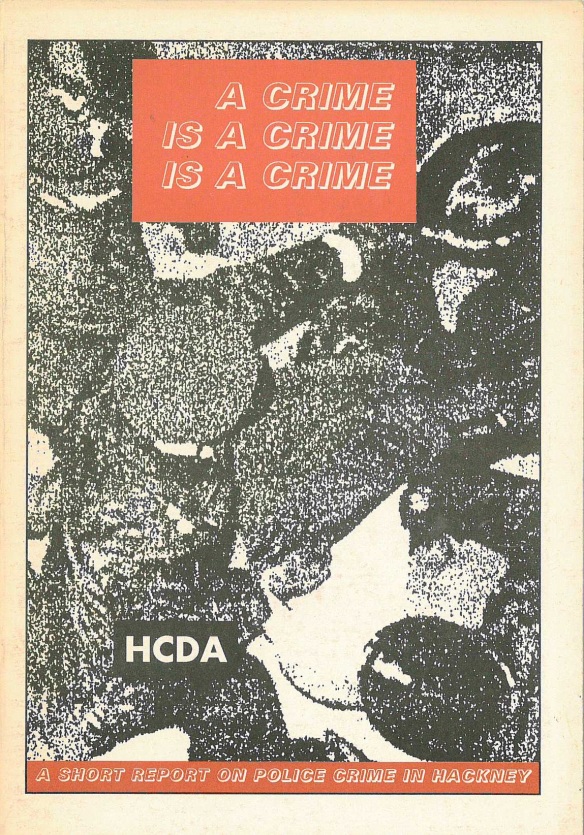 This booklet has now been republished in full on this site.

It is a very readable (though upsetting) account of the misdeeds of the police in Hackney, and how HCDA tried to address them. A number of short case studies and press cuttings are also included.

The corrupt arrogance of the police is particularly evident in some of the accounts of court proceedings as cops contradict themselves, or are too ill to attend court, or complain about fracturing their knuckles on handcuffed suspects whilst in the back of a van:

The officers, all from City Road Station, claimed the men had become violent in the back of a police van when they were forbidden to smoke. They alleged that Lavery ‘bounced up and down’ on a woman PC, fracturing her pelvis while Eaton ‘lashed out madly’ with his feet and fists, fracturing the knuckles of another officer.

Defence counsel told the court, however, that the WPC sustained her injury when the police van screeched to a halt, throwing Eaton and a PC Underhill on top of her.

Two bystanders told the jury that police had repeatedly beaten both men while they lay handcuffed and face down in the road. Doctors who examined them later found almost 40 injuries including head wounds apparently caused-by a truncheon. The men claimed they were assaulted at the scene of their arrest, in the van, in the custody suite at City Road station and later in the cells.

Sunday’s radical history walk around Newington Green was an excellent afternoon out – and very well attended, with over 50 people.

Past Tense have a map of radical Newington Green available (scroll about three quarters down the page). They are also now on Facebook, so “like” their page if you are interested in future walks. 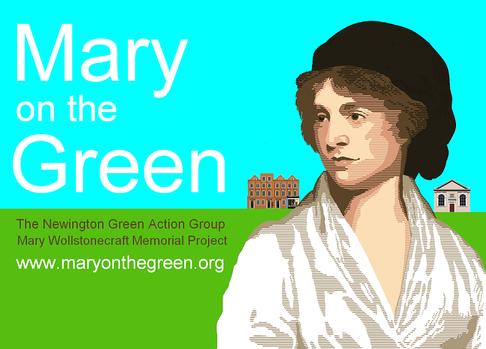 The walk reminded me that I have failed to write anything about 18th Century feminist Mary Wollstonecraft on this site.

Wollstonecraft is best known for her book A Vindication of the Rights of Woman (1792), which is often claimed to be the first major feminist work in the English language. She has a couple of significant connections to Hackney:

Mary’s family briefly moved to Hoxton in 1774, when she would have been about 15 years old.

In 1784 she opened a boarding school for girls in Newington Green along with her sister Eliza and friend Fanny Blood. She also attended the Green’s radical Unitarian Church (which is still there) and befriended its minister Dr Richard Price. The freethinking community of Newington Green at that time meant that Mary was also able to debate with people like Benjamin Franklin, Thomas Paine and Joseph Priestley.

Newington Green was also where Mary started her career as a writer.

The Mary on the Green Campaign is fundraising for a statue of Mary Wollstonecraft to be built and placed in Newington Green.

It was argued persuasively on the walk that Wollstonecraft was written out of feminist history in the 19th Century because of her supposed immoral behaviour, including having children out of wedlock, having affairs etc. London is generally lacking in statues of women, too.

In the meantime there is a less traditional memorial to her on the outside wall of the Unitarian chapel by local artist Stewy:

Organised by some friends:

Is it safe to mention the Suffragettes again, now that the moralising about voting in the election is over? 🙂

*There had been a previous petition on the subject in 1832.

**Henry Fawcett later became the MP for Hackney from 1874 until his death in 1884 and would continue to campaign for votes for women. His wife, Millicent, was the Mrs Fawcett on the banner in the photo below:

Elizabeth Crawford has now traced five of the signatories on the 1866 petition to South Hackney. Her fascinating blog post covers the five’s personal biographical information as well as early participation in the Suffragette movement, Communism and Vegetarianism:

A previous entries on Elizabeth’s site is also of interest: The Women’s Freedom League Toy Factory At Hackney, 1915.

Any further tip offs about Suffragettes and other early feminists in Hackney would be very welcome.

Taken from a Mashable photo essay by Chris Wild titled “1920-1991: Britain votes Communist – The rise and fall of the Communist Party of Great Britain“. Lots more excellent photos to be seen there.

If you are able to identify anyone in this photo, please get in touch and I will include it here.

Previously on this site:

“BeatBooks specialises in rare and used books, magazines and ephemera from the Beat Generation, the Sixties CounterCulture and the Avant-Gardes.”

£300 for a poster is a bit out of my league, but there are some nice scans to have a look at, which I have saved below for posterity. 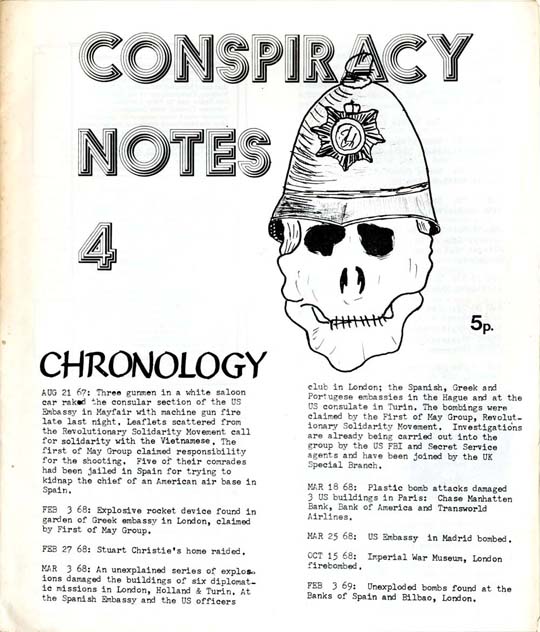 text from BeatBooks about the above poster:

Original poster produced by the Ian Purdie and Jake Prescott Defence Fund (1971). Offset litho, printed in red on yellow stock. Illustrated with an eight-panel cartoon commenting on the stages of life as a series of jail terms.

The text solicits contributions for the defence fund, and reads (in part): “Jake Prescott and Ian Purdie come up at the Old Bailey on 7th September, charged with conspiracy to cause explosions in the U.K. including blowing up Robert Carr’s home. The evidence against them is very weak and dubious, and much of it is based on their political beliefs and their opposition to the Industrial Relations Bill of which Carr is the engineer.”

In December 1971 Purdie was found not guilty on all charges, and Prescott not guilty of specific bombings, but he was sentenced to fifteen years imprisonment after being found guilty of conspiracy to cause bombings on the basis of having written three envelopes. 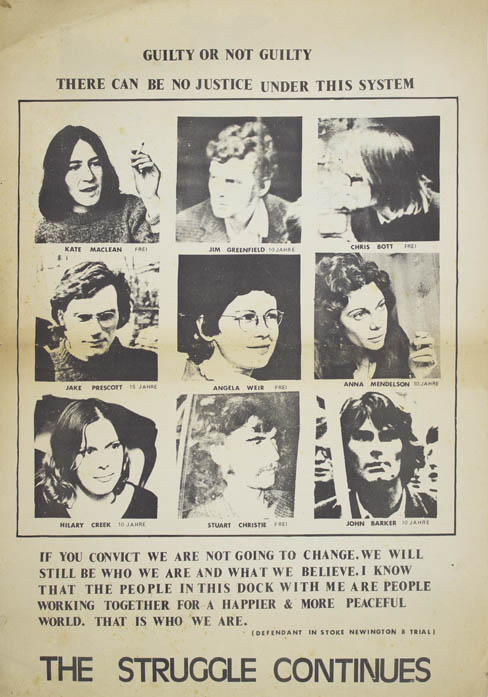 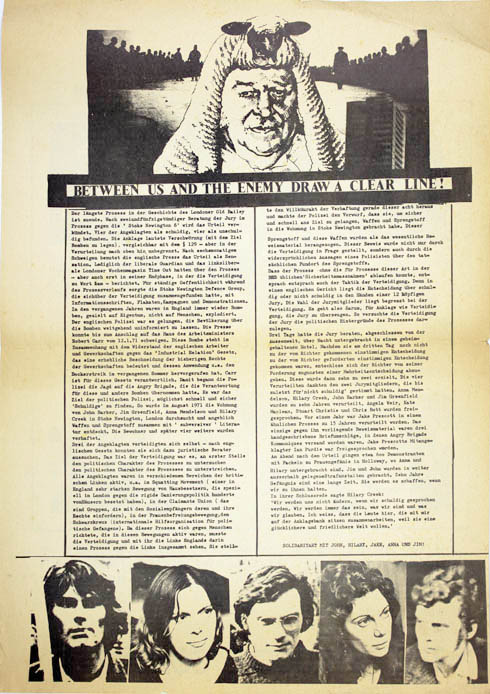 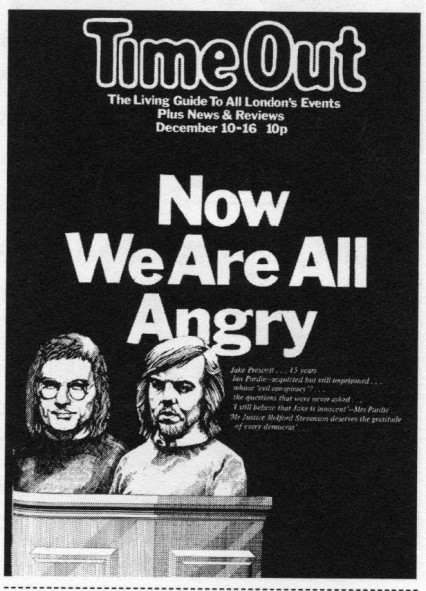 A previous entry will do as an introduction to the Angry Brigade and subsequent Stoke Newington 8 trial.

All the other material on the subject on this site can be accessed by clicking on the Angry Brigade category.

Here are some other bits from around the web:

A recent article in the Hackney Gazette about the Stoke Newington 8 trial, focussing on  anarchist Stuart Christie, his acquittal and a forthcoming film about his life.

Stuart Christie has also flagged up the recent SN8 trial reconstruction that was broadcast on BBC Radio 4:

Two articles about the Stoke Newington 8 trial from Muther Grumble “the North Easts Alternative Newspaper” (based in Durham):

Commander Bomb Explodes – reprint of an article about the trial from Up Against The Law issue 2, 17th February 1973. (republished on the Kate Sharpley Library site)