Please note that this is a radical history site, we are unfortunately not able to help people who have experienced problems with the police.

On January 1st 1987 a young black man, Trevor Monerville, was arrested and held incommunicado in Stoke Newington police station. On January 8th he had emergency brain surgery to remove a blood clot from the surface of the brain. The Family and Friends of Trevor Monerville was set up to campaign in support of justice for Trevor.

On June 25th 1987, Tunay Hassan died in custody at Dalston police station. His family and friends set up the Justice for Tunay Campaign. On November 5th, Gary Stretch was viciously assaulted by seven off duty City Road police officers. Gary and his family have strenuously campaigned for justice.

In response to the number of allegations made against Hackney and Stoke Newington police officers, Hackney Community Defence Association (HCDA) was set up on July 2nd 1988. The Trevor Monerville and Justice for Tunay campaigns and Hackney Anti Fascist Action formed the organisation with the aim of providing the victims of police crime with a campaigning voice.

HCDA is a self help group for the victims of police crime. It investigates allegations against the police, provides mutual support for victims and campaigns against police injustice.
HCDA is continuing a long tradition of resistance to police injustice in Hackney. 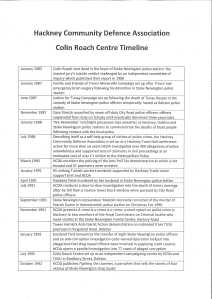 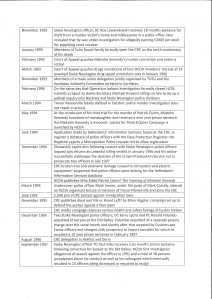