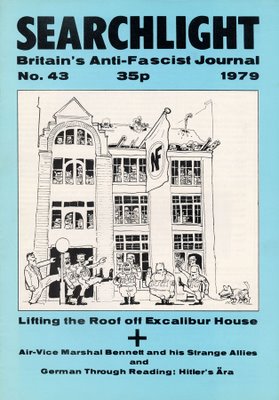 It’s hard to believe now, but from 1978 until the early eighties, The National Front’s  headquarters were at Excalibur House, 73 Great Eastern Street, Hackney, London EC2.

It should go without saying that fascist political parties like the NF are opportunists who will cash-in on and exacerbate existing racial tensions. The UK as a whole was more overtly racist in the seventies. As we’ve already seen, Hackney Council’s housing allocation was found to be racist as late as 1984 without the help from any far right nutters. The Independent Committee of Inquiry into the death of Colin Roach found evidence of racist policing in the borough stretching back to 1945.

According to Wikipedia, the Front ran candidates in Hackney’s council elections from 1975-1980, gaining 3rd place with a respectable 522 votes in the 1975 Kingsmead by-election.

Fuhrer John Tyndall himself ran as the parliamentary candidate for Hackney South and Shoreditch in 1979 (4th place, with just under 2,000 votes) with other candidates fielded in the 1974 and 1983 general elections. NF bigots also ran in the Hackney North and Stoke Newington constituency.

The head of the Hoxton NF had a fearsome reputation:

Even in the Labour Party, I have experienced a reluctance to take on the far right. The most extreme example of this came some years ago when I was one of three people standing for election in Hackney. The agent (a man with real anti-fascist credibility) ordered us not to take part in a debate with the National Front candidate, Derek Day [sic], a violent thug and prominent racist, on the estate where he lived and not to canvas the estate. The agent even came to the meeting to order us out. We stayed, trounced Day in the debate and won over people on the estate as we canvassed. In the pub one evening, my colleague’s handbag hit the table with a big thud. She was carrying a hammer, ‘just in case’. 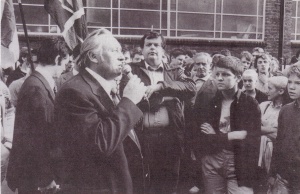 Here’s a video of him climbing out of a his Hoxton flat window in order to be racist to a cameraman, with Johnny Rotten doing disparaging commentary.

Needless to say, tensions were high:

LONDON 1979
“There was a relatively successful attempt to kick the NF off their pitch at the top of Brick Lane on the Sunday. Local NF leader Derrick Day and his Hoxton thugs were routed, with Day running and attempting to hide under a parked lorry. Unfortunately the fat bastard couldn’t fit and attempts by our comrades to kick him under were not appreciated by Derrick. Not even a thank you!” (Anti Nazi League – a critical examination. A Resistance pamphlet.)

Quoted in “Heroes or Villains” pamphlet by Anti-Fascist Action, 1992.

Derrick Day was one of the doormen/security guys for Excalibur House. One of the others turned out to be a more complex character…

For all its faults then and now, Hackney Council wasn’t going to sit back and let a fascist party establish a base on its turf without a fight. There was a planning dispute, with the NF denying the property was their HQ, stating it was merely a base for storage and printing. (Similarly, In the 1990s, the British National Party stated that their HQ in Welling was only a bookshop…) 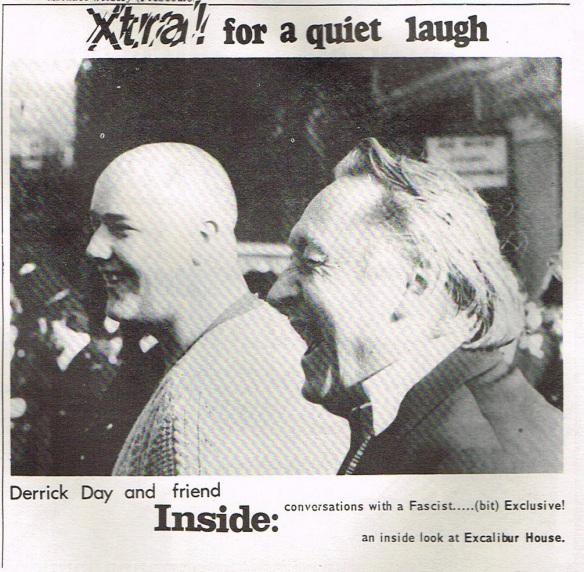 “Simon”, Excalibur House’s night watchman turned out to be an anarchist infiltrator, who was able to give testimony to a public enquiry about the nature of the building. This episode was covered at the time by journalist Ian Walker in New Society, and has now been reproduced for your reading pleasure by Inveresk Street Ingrate blog. If you’ve got this far, you should read the piece in full – it’s really well written and provides some great insights into 1979 Hackney, the inner workings of the NF and the slightly bizarre relationship between Derrick Day and “Simon”.

The furore was also covered in an article in Marxism Today:

Marxism Today – Back To Front (PDF, purloined from the Barry Amiel and Norman Melburn Trust)

At some point control of the HQ became mired in the internal feuding that followed the NF’s disastrous showing at the 1979 elections. Eventually the tiny Constitutional Movement controlled the building.

I’ve not been able to determine when the NF and its acolytes left their EC2 bunker, but Spud Murfy on Urban75 had this to add:

Excalibur House was gutted by fire while it was still occupied. A quantity of NF literature was salvaged and one of their more imaginative papersellers was later seen at the top of Brick Lane trying to sell scorched copies of the Turner Diaries as ‘genuine fire-damaged’ ones. Soon after that the NF vacated the premises.

“Simon’s” experiences of infiltrating the NF were written up in the brief-lived anarchist paper ‘Xtra!’.

Fortunately for everyone, the far-right’s presence in the borough has declined rapidly since that time:

73 Great Eastern Street is now Citfin House. It hosts a number of businesses which I am pleased to see include a language school.