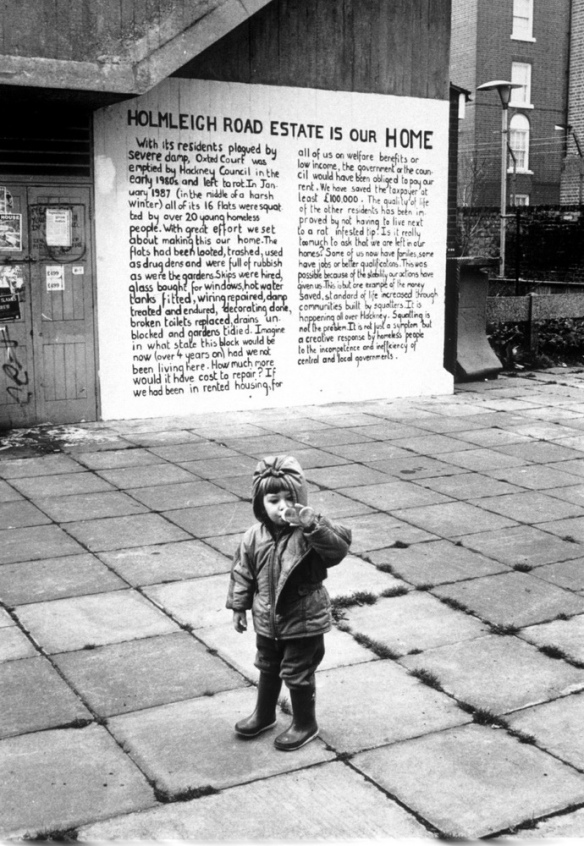 “With its residents plagued by severe damp, Oxted Court was emptied by Hackney Council in the early 1980s and left to rot. In January 1987 (in the middle of a harsh winter) all of its 16 flats were squatted by over 20 young homeless people.

With great effort we set about making this our home. The flats had been looted, trashed, used as drug dens and were full of rubbish as were the gardens. Skips were hired, glass bought for windows, hot water tanks fitted, wiring repaired, damp treated and endured, decorating done, broken toilets replaced, drains unblocked and gardens tidied.

Imagine in what state this block would be in now (over 4 years on) had we not been living here. How much more would it have cost to repair? If we had been in rented housing, for all of us on welfare benefits or low income, the government or the council would have been obliged to pay our rent.

We have saved the taxpayer at least £100,000. The quality of life of the other residents has been improved by not having to live next to a rot infested tip. Is it really too much to ask that we are left in our homes?

Some of us now have families, others have jobs or better qualifications. This was possible because of the stability our actions have given us. This is but one example of the money saved, standard of life increased through communities built by squatters. It is happening all over Hackney.

Squatting is not the problem. It is not just a symptom but a creative response by homeless people to the incompetence and inefficiency of central and local governments.”

More info on the eviction of the Holmleigh Road Estate (where Oxted Court is) in Hackney’s Anarchic Nineties.