Can we start with how and when you arrived in Hackney?
Really by accident. It was round about May 1974. I had a friend who lived in Stoke Newington so, when I saw an unfurnished flat in N16 advertised in the Evening Standard, I knew where it was. I was working in Borough at the time (another now trendy spot, but distinctly not then) so I reckoned the trip to work wouldn’t be too bad.

The same friend had done a small amount of work for Hackney People’s Press and so knew Crispin Aubrey. He rang her up one day trying to get her to do more and she recommended me. Because I was working for a publisher doing advertising design and book production, I thought I might be able to help with the layout etc. So I went to meet Crispin and got roped in.

What were your first impressions of Hackney in the seventies?
It’s difficult to recall what my first impressions were. I lived in Farleigh Road, which is in the very south of Stoke Newington and it was still full of rented flats and bedsits. There seemed to be a small number of middle class enclaves elsewhere in the borough of Hackney – the bits of Stoke Newington closer to Clissold Park, bits of Dalston off Queensbridge Road, De Beauvoir (which is where Crispin lived), some of the terraces near Victoria Park (although that was a long way from me). Farleigh Road was not really in that league.

Finding a newsagent near me who stocked the Guardian was not that easy, for instance. And if you spotted someone else buying or carrying it, you sort of nodded at them, recognising them as someone a bit like you.

Were you involved in any political/community projects prior to Hackney People’s Press?
No. I was pretty politically naive. There were a number of people around who seemed to spend a lot of time selling their own newspapers (Socialist Worker, Morning Star, Red Weekly or whatever.) I didn’t really know what the differences were between them, and why they all hated each other.

Can you describe what HPP was? What were its aims and who was involved? Was there a defined audience for it?
It grew out of people involved in Centerprise. If you’ve seen Ken Worpole’s writings about that time it gives you a pretty good flavour. I came in just when the earliest people such as Ken had stopped, which is why Crispin was struggling keeping things going virtually on his own. We worked on two or three issues together, along with a few other people. Then Crispin stopped, and it ground to a halt for about nine months.

Then I got two or three people together and started it again, with a big plea for new people to come along and help. A few did, and we kept it going pretty much every month for the next ten years or so.

Other than me, the people involved changed several times over the course of those ten years – I was the only one to stay with the project right up until we stopped. But the basic way of working didn’t change much. We used to do the production over a weekend, finishing off on a Monday night. Then I would take the boards to the printer on Tuesday morning on the way to work and we would get finished copies back by the Friday night in order to do the distribution over the following weekend. 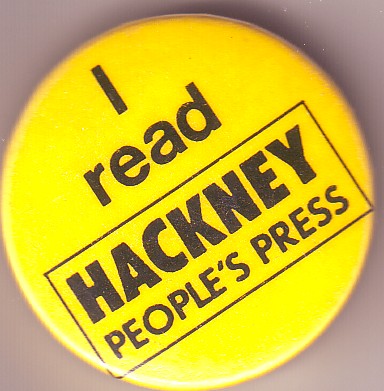 I’m interested in the basics of production and distribution –how many were printed? How was it funded? How did you get it out to people?
In the early days the production was all done at Centerprise. This was pre-DTP days, so we did all the work with columns of text typed on a golf ball typewriter, and headings done in Letraset, pasted onto large white sheets of card. We used Ken’s IBM golfball typewriter for the text and Letraset for the headings. Later, we acquired a golfball typewriter of our own, after one of our then collective went to Holland and raised some money from people there who were interested in helping inner city projects in London.

We then started producing the paper at a printers called Trojan Press. This was a new co-operative which had been set up by a few local people including the same guy who went to Holland. In the early days they also made badges including the “I read Hackney People’s Press” badge. The paper was never printed by Trojan as their machines were too small, but it was a very convenient place to do the layout.

A lot of the production equipment – scalpels, Cow Gum, metal rulers etc – I used to bring from my work. Letraset was expensive. When we had some spare cash, we bought a few sheets. As far as I recall, we printed 1000 copies.

In Crispin’s day, the paper was made up of A3 sheets, stapled together on the left hand side. I didn’t like that as I thought it looked unprofessional, so when we relaunched in I cut the format down to 8pp A4, and then later 12pp A4. After a while we found a printer who could print on A2 sheets, so we started producing the paper as 8pp A3. I was quite chuffed when we did that and thought we were on our way to becoming a “real” paper, which was always my ambition.

We had a network of 20 to 30 newsagents in Hackney who would take the paper on “Sale Or Return” terms. I don’t think any took more than ten or twelve copies, some took as few as four, so it was a fairly futile exercise. It would take me several hours on a Saturday to deliver to them all. The main outlet was Centerprise. In the early days they would sell more than a hundred copies. Maybe even 150-200 some months.

A few people would take copies to sell themselves. Some councillors would even sell it at Labour Party meetings. 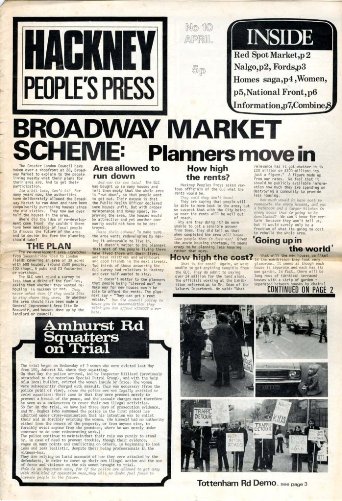 Finally we used to sell papers ourselves on a few estates, on Sunday mornings. De Beauvoir and Holly St were the most regular ones we went to, but we used to try a few others at different times. Not everyone was too happy about being woken up at 11 on a Sunday morning by a bunch of hairy lefties, but we probably got rid of 30 or 40 copies most times.

Events like the Hackney Marsh Fun Festival were also good places to sell papers. I seem to recall six or eight of us getting rid of over 100 papers one year there, which we were very pleased about. Occasionally we would get people wanting to advertise. The Communist Party for instance would put in regular advertisements for the Morning Star. A lot of people probably thought that we were a CP front, as they were quite into community politics at the time, but no one regularly involved in the paper was actually a party member.

Were there any notably successful campaigns?
I don’t recall us initiating any campaigns of our own, so I don’t think this applies. We tended to report on campaigns which ranged from major national things through to very local stuff.

Any agonising cock ups you can recall?
I’m sure there were loads of things we got wrong, but I don’t recall anything so bad that it is still seared into my brain.

Was there any friction with the authorities – the Council, police, etc?
Not really with the police, although I was hit on the head by a policeman while reporting on the 1981 riots in Dalston. I don’t think, however, he was targetting me as a HPP representative. We had a run in with one particular councillor, who we inadvisedly referred to as having ‘racist views’. Not surprisingly he took exception and threatened to sue everybody including our printers. He wanted a large sum of money paid to charity but in the end we paid £100, which we raised through a public appeal.

How did HPP change during the time you were involved?
There were always a very loose group of people involved at any one time. Often people were around for a number of years and then just drifted away. The paper inevitably reflected the interests of those who were around at the time and I suppose as the one who (a) was around the longest and (b) put in the most time in the production process, I must have had a dominant effect.

So, as I progressed over the years from in 1974 being an ill-informed idealist to in 1983 joining the Labour Party (just after the general election), the work I did for the paper also changed. By then the council was controlled by a soft Left grouping, with which I was broadly sympathetic. They were then ousted by a harder Left grouping. I remember being particularly annoyed with myself that I didn’t predict this. With the benefit of hindsight I now see this much more clearly. The notion of community politics was something I used to enable me to write about or report on things that basically I found interesting. And the same probably went for other people who were involved in the paper. So we were a self-selected group who wrote about self-selected issues.

It’s interesting to reflect that over the 100+ issues I worked on I can’t recall anyone ever saying that we shouldn’t be covering a certain subject. Basically if someone wanted to write about something it went in. So, as the group of people producing the paper changed (and matured!), the paper itself changed.

And why did it stop?
I’m not sure why. Just general tiredness I suppose. I had moved jobs in the autumn of 1984, going to work for the GLC no less. This seemed to take up a lot of my time. We produced an issue in June 1985 – and then nothing happened! I would usually ring everyone to set up a meeting, and I suppose I never did. A few people did ask me when the next issue was coming out, and I would say I didn’t know. I supposed a few people missed us. We used to pay the printers when we collected the paper, so we didn’t have anyone chasing us for an unpaid bill. So… we just stopped.

There is a complete set of papers in the Hackney Council Archives department, along with some of the photographs used in the paper over the years.

Charles can be contacted via charlesjfoster@gmail.com

Crispin Aubrey died last year at the age of 66. The Guardian’s obituary is a very interesting read.

The excellent Past Tense have contacted me with information on these two walks:

Includes: police spies, police killings, community organising, anti-fascism, ’81 riots, refugee squats, armed struggle and just how shit does someone have to be to get roads named after them?

“All welcome, especially those who know more than us about these things.”

Radical History of North East London:
Celebrate our history, avoid repeating our mistakes, and get
inspiration to help create a better society for the future

Community Empowerment in Parks and Open Green Spaces (in Haringey,
North East London and beyond…)

We will be looking at