An article by Dora B Montefiore, which appeared in the journal New Age in February 1904.

There were 28 Board Schools in Hackney at that time – it’s not clear from the article where this small bit of resistance took place. (See below for some notes on Board Schools)

Humanitarians, among whom I trust are many women, owe a debt of gratitude to Arthur Hall, aged 13, who on January 13 at the Board school, Hackney, vindicated by passive resistance his right as a human being to refuse willingly to submit to the indignity of corporal punishment.

If mothers held in the State the position which is their right, it is scarcely believable that these degrading exhibitions of violence inflicted on those still too weak to resist physically could continue. If a boy or girl of thirteen has the moral courage to offer the example of moral resistance to the terror of violence, which hypnotises for the time being his or her companions, that child, properly treated, has the makings of a Hampden, a Josephine Butler, or a Wilberforce.

According to the report in the Morning Leader, the North London magistrate, Mr. Fordham, “compared the boy to a jibbing horse, and said most people would hold that it was not cruelty to thrash a jibbing horse into submission.” As far as I have seen, no one has protested in print against the insolence of this magisterial pronouncement. Putting aside the very doubtfully effective cure in the case of horses (the most highly nervous and sensitive amongst animals) of brutal and senseless thrashings to induce them to submit to the will of man, I would ask Mr. Fordham by what right he dares, in his magisterial capacity, to compare the children entrusted by their parents to the teachers in the Board schools for physical, mental, and moral training to jibbing dumb animals, and advises and approves of their being treated as such?

I would remind him that Board school teachers and magistrates are paid servants of the people, and that they are entrusted with their offices in order that they may train, educate, and influence the children of the people in the highest ideals of good citizenship, and of morality based on the sanctions of what is best in socialised action, not that they may degrade and brutalise those children through the terrors of corporal punishment.

The Facts of the Case

As presented to the public in the newspaper reports, the facts of the case are as follows:- The Chief Technical Instructor at the Board school blew a whistle for the boys to fall into line, “but at that moment another boy had struck at Hall with a knotted rope, and missed; Hall laughed, and the instructor ordered him to stand out for two ‘handers.’.” It was then that Hall, feeling he had done nothing to deserve punishment of that sort refused to submit to the indignity, and the head master, who was then called, must have felt more or less in sympathy with the boy’s attitude, for the report says he advised the boy to submit.

Most lads would have submitted, would have taken the two “handers,” and would thereby have lost force and independence of character. All honour to Hall that he still passively resisted, and refused to hold out his hand to receive the traditional and conventional indignity, which, be it remembered, when all the forces of the powers that be are arraigned against a luckless youngster, is so much easier to submit to than to resist. “He would not, however,” says one of the reports, “be persuaded or forced into submitting to take a punishment which he did not consider he deserved,” and six times he was forcibly held over a bench while he received in silence six blows with a stout cane.

Nine days after the thrashing severe bruises were found by the police surgeon on the boy’s body. Do mothers realise that the bodies of their children are their own flesh and blood, and, that each blow inflicted on those tender organisms is a blow struck at their own personal dignity and at their own motherhood?

The senselessness of the punishment

To take no higher ground, but arguing merely from the comparison of the jibbing horse, which appeared appropriate to the magistrate before whom the case was tried, I am prepared to maintain from experience that more horses are made confirmed jibbers by thrashing than are cured of the habit by the use of this too often senseless method.

In Australia, where horseflesh is cheaper, where colts are seldom handled till they are rising four, and where the methods of breaking are sharp, senseless, and brutal, the young animal, not understanding what is required of it, often becomes sulky and inclined to jib. The only panacea known to the ordinary bushman is thrashing, and more thrashing, and still more thrashing. Sickening scenes, that have made my blood boil, and caused me to feel ashamed for male humanity, are the result; and Australia possesses a record number of jibbers.

Just as in old convict days what were known as obstinate convicts both in Tasmania and Australia were on several occasions flogged to death, so nowadays wretched, nervous, terrified horses, flogged into stupidity, lie down and die on dusty bush roads, the victims of men in whom the germs of senseless cruelty have doubtless been sown by previous cruel treatment.

From personal experience on two occasions with young horses, pronounced confirmed jibbers, and sold for a song, I can affirm that kind and understanding training and handling can change these poor obstinate dumb beasts into affectionate willing friends, eager to respond to the slightest turn of the wrist or pressure of the muscle of the leg when being driven or ridden.

I therefore deny Mr. Fordham’s assertion that it is necessary and not cruel to thrash a jibbing horse into submission, and I protest in the name of human dignity, of advanced morality, and of scientific pedagogy against the methods of discipline advocated by that gentleman, and carried out by the head master of the Board school, Hackney.

The London School Board was created under the Elementary Education Act 1870 to set up schools in the area covered by the London County Council.

The Hackney division of the school board for London included Shoreditch and Bethnal Green and had offices at 205 Mare Street. The board was warned in 1872 that compulsory attendance could be achieved only after a building programme in the poorest districts, where absentees were “of such a low order” as to be unfit to mix with children in regular attendance.

In state-run schools, and also in private schools where at least part of the funding came from government, corporal punishment was outlawed by Parliament with effect from 1987.

(However in 1993, the European Court of Human Rights held in Costello-Roberts v. UK that giving a seven-year-old boy three ‘whacks’ with a gym shoe over his trousers was not a forbidden degrading treatment.) 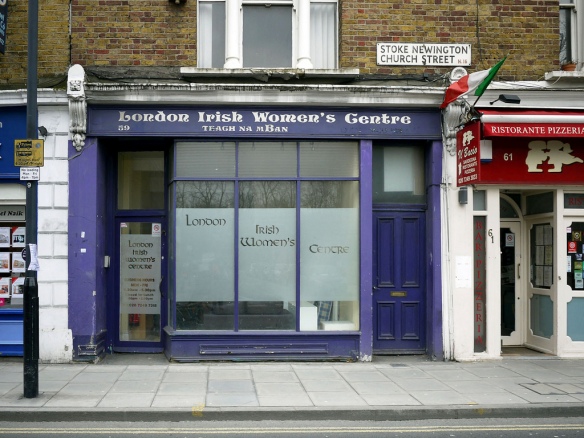 Photo by Alan Denney from his highly recommended Flickr site.

London Irish Women’s Centre was at 59 Stoke Newington Church St from the early eighties until 2012.

“Breaking Ground” is a film about the history of the centre, which is being shown on 24th of November as part of the Irish Film Festival London. The bad news is that it’s happening on the other side of town, at Riverside Studios in Hammersmith! More info and ticket details here.

This unique documentary presents a new chapter in the history of Diasporas in the UK. Made by an all women crew it tells the fascinating story about the rise and fall of the London Irish Women’s Centre, a radical organisation based in North London from 1983 – 2012. Featuring unique archive material, the documentary intercuts eighteen different interviews with women involved in the organisation over its rich twenty-nine year history. The London Irish Women’s Centre was founded to provide an alternative cultural and political space for women to be Irish, supporting and representing all women in London who identified themselves as Irish, regardless of politics, religion, colour or class.

The film charts the centre’s activities, from its political and social campaigning to its provision of desperately needed services for Irish women in London. Throughout the 80s Irish women arrived in their droves and towards the end of the decade they made up 10% of the capital’s female population. Many of these women were not simply economic migrants but women in search of an alternative life, away from the repressive predominately Catholic culture of Ireland. Their optimism for a new life was tempered by the reality of life in London. Irish women were among the most disadvantaged ethnic and gender groups in terms of housing and employment. From the organisation of the first Irish Women’s conferences in the UK, to the support of research on Irish women and housing and employment, the London Irish Women’s Centre’s work impacted on the culture and politics of London. The organisation openly discussed and made public, issues pertinent to both women in Ireland and Irish women in London against a backdrop of anti-Irish racism from within the UK and at best indifference from the mainstream Irish community in London.