I have mixed feelings about blue (and other colour) plaques.

On the one hand, they are a handy resource for local historians and can highlight hidden aspects of buildings and places to passersby.

On the other hand they generally promote a point of view where history is made by individuals rather than groups, movements and so on.

Furthermore their official status tends to favour respectable (or very old) radicals. So Stoke Newington boasts a placard for peace poet Anna Laetitia Barbauld at 113 Church Street, but there isn’t one at 359 Amhurst Road, site of the infamous police raid that lead to the Stoke Newington 8 trial.

But also… most of the statues and monuments in London are for bastions of the establishment and not those fighting against it. So maybe the more modern plaques can balance things out?

Despite all that I was intrigued to see this tweet from the Council recently:

Not least because I’d assumed that Blackstock Road was well outside the borough, but it turns out the eastern side of the street is Hackney and the western side is the badlands of Islington. Which means the site of the new plaque is the furthest Western point in Hackney: 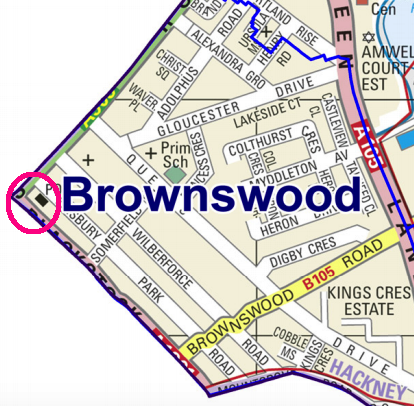 Who Was Gerald Holtom? And what was he doing in Hackney?

Holtom graduated from the Royal College of Art shortly before becoming a conscientious objector during World War Two. In 1958 he was invited to design artwork for use on the first Aldermaston March, organised by the Direct Action Committee against Nuclear War (DAC).

There are various conflicting stories about the artwork’s creation but most people seem to agree that Holtom actually designed the logo at his home in Twickenham (and not in Hackney as per the Council tweet above).

It was a composite of the semaphore for the letters N and D (Nuclear Disarmament):

On the evening of 21 February 1958 Holtom presented the logo to a meeting of DAC at the offices of Peace News* at 3 Blackstock Road. The group accepted the logo and it had its first outing at the Aldermaston march on 4-7 April: 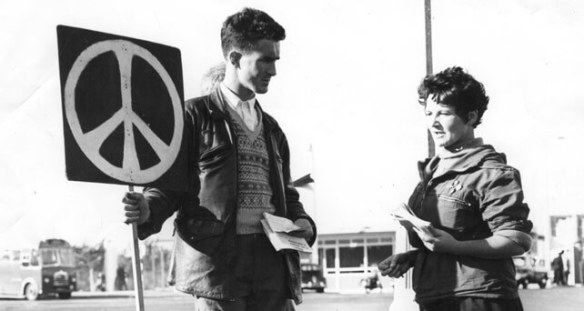 It’s worth noting that DAC have been described as the “direct action wing” the Campaign for Nuclear Disarmament (which had also formed in 1957) with some overlap in membership. Alan Lovell describes how DAC’s work in Aldermaston did not stop with the march:

Some months after the march, the Committee returned to Aldermaston for an eight-week picket. The aim of the picket was to make people in the area aware of what was happening at the Aldermaston establishment, to get trade unions to black work on the establishment, and to get individual workers to leave the place.

During the eight weeks, the Committee visited trade unions, distributed leaflets and held factory gate meetings, and canvassed in the surrounding villages. As a result of these activities, five people have actually stopped work at Aldermaston ; three men who were going to apply for work at the base changed their minds ; and five lorry drivers said that they would not drive any more loads to the base.

The pickets were well received by the workers — when a new leaflet was produced the workers often stopped to ask for a copy.

DAC wound up in 1961, with most of its members getting involved with the larger Committee of 100. CND took over the organisation of the Aldermaston marches from 1959. Both of these organisations also adopted Holtom’s logo, which is now globally recognised as a symbol of peace and nuclear disarmament.

The first clip below shows some of Holtom’s original artwork and includes an interview with his daughter, Anna Scott:

The plaque in place

The campaign to get a plaque on Blackstock Road originates with this very readable article by Guardian journalist Ian Jack in 2015:

He gave his unforgettable work for nothing. Shouldn’t the designer of the peace symbol be commemorated?

As it says, the logo has proliferated so much because Holtom did not wish it to be trademarked or copyrighted.

I wasn’t able to make the plaque unveiling last weekend due to a hangover and the fact that it was absolutely pissing it down with rain. It is worth having a look for if you are passing, but you will need better eyesight than me if you want to actually read it…

NB: There is a load of guff on the internet about the symbol being anti-christian or satanic because it is supposedly either an upside down broken cross or an inverted Algiz rune, which symbolises death. As it says above, Holtom combined the semaphore letters N and D to create the logo. In a number of (non-bonkers) accounts he is described as being a Christian himself, and had originally considered using the christian cross as part of the logo (presumably the right way up!).

*Peace News was based at Blackstock Road from 1948 to 1958. It shared premises with Housmans Books which was then primarily a mailorder operation. In 1959 both organisations moved to 5 Caledonian Road where the excellent (and fully endorsed by me) Housmans Bookshop is still based today.

“They’ve Taken our Ghettos: A Punk History of the Woodberry Down Estate”

This exhibition brings together prints, illustrations, photographs and text, created by a diaspora of punks who lived as squatters on the Woodberry Down Estate in the Manor House area of London in the 80s and 90s. This show was conceived in response to the estate’s current redevelopment, which recognizes only consenting voices in its gentrification process.

This timely exhibition portrays aspects of an existence built on dissent, autonomy and communality, as an alternative to the neo-liberal values of ruthless individualism which held sway at that time. While the lifestyle was far from idyllic, at times dystopian, at its best it offered unmediated freedom and a real alternative to its participants.

Reflecting the principles of the community itself, no distinction is made between professional and amateur art and writing. And while some of the contributions are by known artists, writers and musicians, the rationale behind the exhibition is to present an expression of a life lived from those who lived it.

We will have an opening party on 2 July, with the bar also open for craft beer, cocktails, wine and food.

“A project to help uncover and celebrate the history of the Woodberry Down Estate over the past 60 years.”

Contents so far include some great photos of residents in the 1950s, an open invitation to attend their “Memory Shop” and share experiences of living on the estate.

In May, a Guardian feature on the recent radical transformation of Woodberry Down entitled “The truth about gentrification: regeneration or con trick?” produced a very defensive response from the council.

The People’s Story of Woodberry Down is being run by Woodberry Down Community Organisation “in partnership with Eastside Community Heritage, Manor House Development, Genesis Housing Association, Berkeley Group and Hackney Council.” So it will be interesting to see how critical of the council, housing associations and regeneration process the project will be.

Apologies, but I forgot to flag up yesterday’s Hidden River Festival, marking 400 years of the New River.

It was a nice event and I was pleased to see a couple of local history stalls amongst the cup cakes.

The comrades at Past Tense had their excellent pamphlets available, including the freshly published “Free Like Conduit Water: The New River, its moral and immoral economies” by John Tyre. I’ve not read it yet, but it looks fantastic and includes material about the New River’s route through Hackney.

There was also a stall by the Woodberry Down Community Organisation (the resident elected body that represents all residents and those who work from commercial premises within the estate).

They are working on a history project – here is the text of their leaflet:

WOODBERRY DOWN: WHAT IS YOUR STORY?

Woodberry Down Community Organisation (WDCO) is applying for funding for an oral history project – “Woodberry Down, the People’s Story” – and we would like your support and participation. We are looking for:

Eventually we hope to produce a book and exhibition. Right now we are looking for people who would be willing to:

If you can help or would like to be involved contact WDCO at 6 Chattenden House, Woodberry Down Estate, London, N4 2SG or e-mail: wdhistory at hotmail dot co dot uk (with “at” replaced with @ and “dot” replaced with a full stop.)